Email us on [email protected] 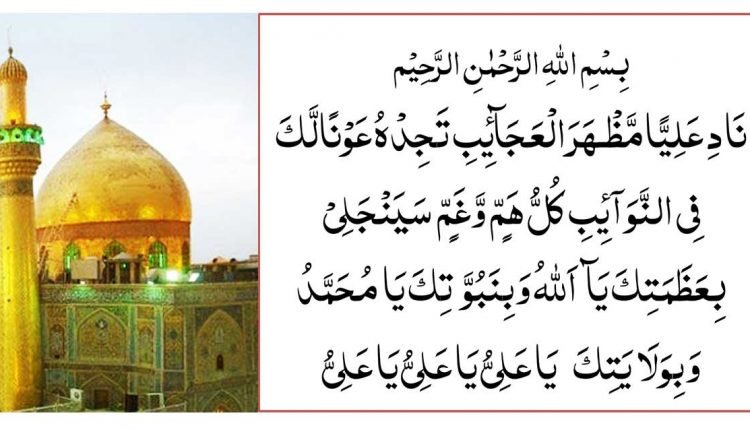 Nade Ali or Naad-e Ali is a form of text that is considered sacred and holy among Muslims. It is often recited as a form of prayer during times of crisis and trouble. Nade Ali is said to have come from the Holy Prophet through Archangel Jibraeel. During the time of the Khaybar Battle, Mawla Ali was said to recite this particular text and was able to survive. Since then, Muslim followers have recited the Nade Ali for the following benefits:

The Nade Ali or Naad-e Ali is commonly known as a prayer for protection from the various dangers in the world. Some have advocated reciting the Nade Ali several times every single day to help get rid of enemies, bad omens, and troubles in life. Some people even recite this sacred Muslim text up to a thousand times to free oneself from danger.

Many Muslim believers also recite the Nade Ali to help heal themselves from a serious or incurable disease. For this particular reason, people are advocated to recite the prayer up to 21 times over a glass of water. The water will then be given to people suffering from various disease or ailments.

For people who have been poisoned or those who believe they have various toxins in the body, reciting the Nade Ali on a clay plate is also considered an effective way of treatment. After reciting the prayer, the clay plate needs to be washed using clean water and the remaining water shall be given to the poisoned person.

The Nade Ali is also prayed for its wealth and prosperity benefits. Reciting it several times and at specific times of day is also said to help invite good fortune and positive energy to improve one’s wealth.

Overall, the Nade Ali is considered a way to pray and meditate for various Muslim believers. Reciting the prayer alone is enough for most people in the sense that positive energy is invited which could later translate to more good things and blessings in life.