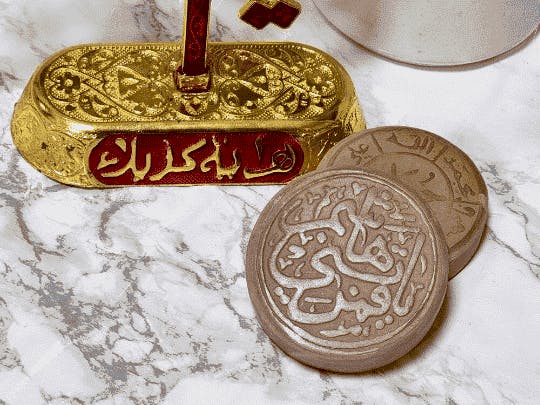 Importance of Turbah in Islam

Turbah is a piece of soil or a seal used mostly by Shia Muslim community as the forehead-resting place for prostration. Shia Muslims prostrate on Turbah while it is touching their forehead during Sajda. It’s made mostly of the soil from Karbala which is a very sacred place for all the Muslims in the world. From the perspective of Fiqh, it can be made from other materials too which are natural but not edible. However soil of Karbala is always preferred.

The importance of the soil of Karbala in Iraq is because Hazrat Imam Hussain got martyred on the land of Karbala and the Prophet (PBUH) already knew it years ago through an angel. He kissed this soil and wept. He told his wife that this soil is where Imam Hussain will get martyred and when this soil will turn red, it would mean he is martyred.

As all Muslims cannot pray in Karbala, so the Turbah was made so that it can go all around the world. It is allowed in Islam to prostrate on piece of soil. Soil is also considered as clean dust which can be used as substitute of abluton when there is no water around you.

Prophetic Traditions in support of Turbah

There are many Prophetic traditions that clearly prove that he (s) also prostrated on earth and ordered his Sahaba to do likewise.

“The Prophet (s) had the sign of Mud on his forehead and Nose, due to prostration on Mud”

All of the below traditions have been taken from Volume 7 of Kanz ul Ummal from the section on sujood laws/hadiths:

We should also point out that Ali Muttaqi al-Hindi raises no objection to this tradition in Kanz ul Ummal.

Ibn Attiya narrates “Verily God does not accept the Salat of One who does not put his Nose right on the EARTH/SOIL”.
Kanz ul Ummal, Volume 7 Hadith 19775

In another hadith, again the concept of praying on EARTH/SOIL is mentioned by Al Daylami who narrates from Abdullah ibn Masood, the Sahabi that:

“Verily Allah does not consider/look at the Salat of a person who does not touch his palms on the EARTH/SOIL.”
Kanz al Ummal, Vol 7. Tradition No. 19801

“Bow/Prostrate your Face on EARTH/SOIL Towards Allah”
Kanz ul Ummal Vo.7 Tradition No. 19809

And a similar (though mursal) tradition has been narrated by Abdul Razzaq from Khalid:

None of these above traditions has been shown to have any problem by anyone in Kanz ul Ummal in terms of authenticity of content or narrators. Learn more here and we hope you have learnt more about the Importance of Turbah in Islam through this article.